In my last post I showed you how to use the Deriscope Stock Trading Simulator Excel spreadsheet to place simulated BUY and SELL market orders on US stocks traded on IEX (the Investors Exchange). In this post I will guide you through another Excel spreadsheet called DsTradingSimulatorFX.xlsm that you can also download for free. This new spreadsheet allows you to place simulated BUY and SELL orders on specific currencies based on real time bid/offer quotes supplied by the TrueFX live feeds provider. As usually, the only prerequisite is that you have previously installed the free Deriscope Excel Add-In – downloaded from the same site as above - that equips your Excel session with a wizard that allows you to fetch live data from various providers and also perform various financial calculations.

When you open the Deriscope spreadsheet, the sheet named "DsSimulator" will look like that: 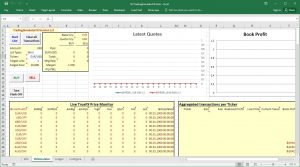 If your Excel is in automatic calculation mode, it is likely that errors will appear on the various cells due to Deriscope not being yet enabled.

Deriscope will be enabled and live feeds will keep coming as soon as you click on the "Start Live" button. You can control the frequency of the incoming live feeds at the sheet named "Configure" under the "Takt" label. 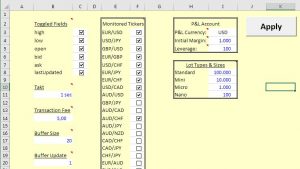 The default is set to 5 seconds, but you can set it as fast as 1 second.

In that "Configure" sheet you can also define the currency pairs you wish to monitor, the denomination currency of your brokerage account, the size of each trading lot, the leverage you agree with your broker and your initial investment amount. All these entries are fully explained in the respective cell comments.

The important aspect here is that live feeds are NOT time delayed! They are coming straight from TrueFX and provide you with the actual bid/offer quotes of the selected currency pairs. In particular the yellow area under "Live TrueFX Price Monitor" reports the current bid and offer rate on each currency pair listed on the left column. In addition, the high, low and open quotes are also reported plus the timestamp of the live feeds generation on the TrueFX server side. The next screenshot shows how the spreadsheet looks like during typical operation: 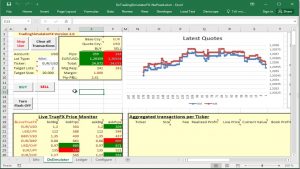 Just like the Stock Trading Simulator, this simulator also includes a chart of the bid and ask quotes that extend up to the time of the last received feed (see below). 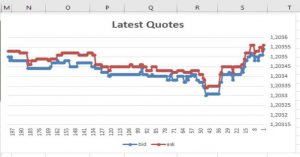 As in the Stock Trading Simulator, you can customize the total number of received feeds collected and retained in memory as well as the collection frequency (which may differ from the live feeds update frequency) in the "Configure" sheet. The quotes are then "poured", as soon as they are received, in the yellow area under the "Latest quotes" label as shown below.

Please read my comments on my previous post with regard to the possible uses from your part of these streaming data.

You are not restricted on placing orders on one currency pair only. You may select any pair out of those displayed in the Live Monitor area, provided its Quote Currency agrees with the Account Currency you have set in the "Configure" sheet. Then you may select the number of lots that you wish to trade and then press either the BUY or SELL button. Afterwards the details of the undertaken transaction are permanently recorded in the "Ledger" sheet (picture below).

As you keep placing BUY and SELL orders on various currency pairs, the Ledger keeps expanding, but you can conveniently see you aggregate positions on each pair as well as your total P&L at the table under the "Aggregated transactions per Ticker" label. Both the realized and total (book) P&L is reported. The respective chart titled "Book Profit" is a visual report on your current P&L position (picture below). 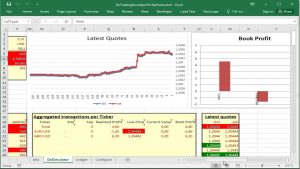 Below is a video tutorial that shows in more detail how you can use this spreadsheet.

Feel free to contact me if you want to share any thoughts with me with regard to this product or if you want me to add any particular features. Contact info and social media links are available at my web site  https://www.deriscope.com