Tom [Tailor] and Gerry [Weber] are two German fashion boutiques (both are small caps). On January 7, 2016 I wrote a post "Tom And Gerry - Turnaround By Two German Fashion SmallCaps". In this post I correctly predicted the growth of Gerry Weber, based on the previous growth of Tom Tailor. Now one could have predicted the fall of Tom Tailor based on the previous fall of Gerry Weber. A perfect pair for peer trading isn' it?!

In Russia they say: one case it a coincidence, two cases is already a system.
In my post on LinkedIn I reported that I successfully used the strong correlation of this peers. Today we have encountered, so to say, a mirrored case.
On Jun 14, 2018 Gerry Weber issued a profit warning, which send its stock in a free fall. 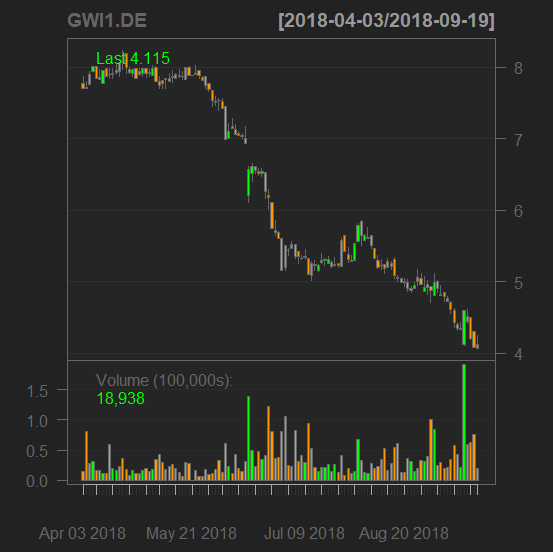 The stock of Tom Tailor already was in a downtrend too but those, who bought this stock 1.5 years ago still could have yielded a good profit. But those, who blindly followed "buy-and-hold" mantra, have faced the market (over)-reaction on the Tom Tailor profit warning: -16.63%!
Well, sometimes it is really better to listen to the peer stocks than to the apologist of (total) market unpredictability.

P.S.
One may notice the Zalando case, which also has dropped recently.

This were also a worthy observation, however, I would not consider Zalando as a peer of Tom Tailor and Gerry Weber. First of all Zalando is an online business, secondly it was overpriced from very beginning in terms of P/E and last but not it is mostly oriented on young people (whereas Gerry Weber is for old ladies).

P.P.S.
By the way, although it is prematurely to buy these stocks (do not try to catch a falling knife) it does make sense to take them in a watch list. Keep your eye at this pair: if one peer starts growing and another does not immediately follow, it might be the repetition of the opportunity, which took place in the beginning of 2016!