Market were really turbulent during the last weeks. We committed a lot of trades with Elle and did some important calculations of our trading costs.

2) On 29.06.2018 we sold our Viacom shares. Since stock trading by DeGiro is though cheap but (contrary to selected ETF) not free, it was a good exercise for Elle to calculate what we have actually earned and to compare the gain with the trading costs.

I must admit, in spite of all my hints Elle was unable to calculate how much money we have earned with this trade. Well, she is just a seven year old girl... but can YOU do this?! 😉

Solution: how much we have earned with Viacom stock

As to costs, we cannot calculate them so straightforwardly, because the broker fees are in EUR but the custody fee is in USD. Additionally, there is a fee for the currency exchange. But roughly summing just broker fees we obtain €1,06. Thus it was a really expensive trade!

As before we are convinced with the Viacom's outstanding fundamentals. However, we also never underestimate the sentiment. Thus looking what happened to RTL and ProSieben (two German peers of Viacom)

we decided not to risk too much and sell. In short term view it was the right decision, as you can see

4 Last but not least we reconciled the costs, which cannot be attributed to any particular trade. In our case these are so-called modality fees for NASDAQ stock exchange (we traded GoPro and Viacom on NASDAQ).
Here is the list of all modality fees that were currently paid (and they will be charged further till the total sum reaches €2.50)

You may think that than it is Degiro's mistake in costs attribution since this custody fee can be unambiguously attributed to the Viacom stock. Well, to stock yes but to trade no. I mean we could have bought Viacom in several tranches but the custody fee for the dividends would be charged only once. However, our suggestion to DeGiro would be to explicitly disclose such "residual&qout costs.

P.S.
As you might notice, currently we are (almost) breakeven, whereas some weeks ago we can boast with the CAGR of 8%. The cause is our bad luck with Platinum. 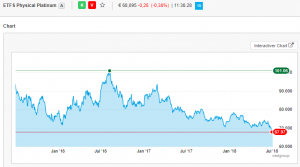 However, as we have already said, we are ready to keep this position as a long-term investment. The demand for platinum is driven mostly by the producer of diesel vehicles and the news flow gets positive.