Elle keeps practicing to read the charts and recently she found a strong resistance level for DAX at 12600. So we partially went to cash, however, somewhat prematurely. We tried to turn this setback into an opportunity and bought Viacom (VIAB) stocks... which dropped by -6% today. Still we hold it for a fundamentally good investment and will keep the stock.

After the recent correction the markets are recovering quickly. However, as the DAX reached a strong resistance level at 12600 (which Elle has readily recognized) I suggested to partially sell the portfolio. 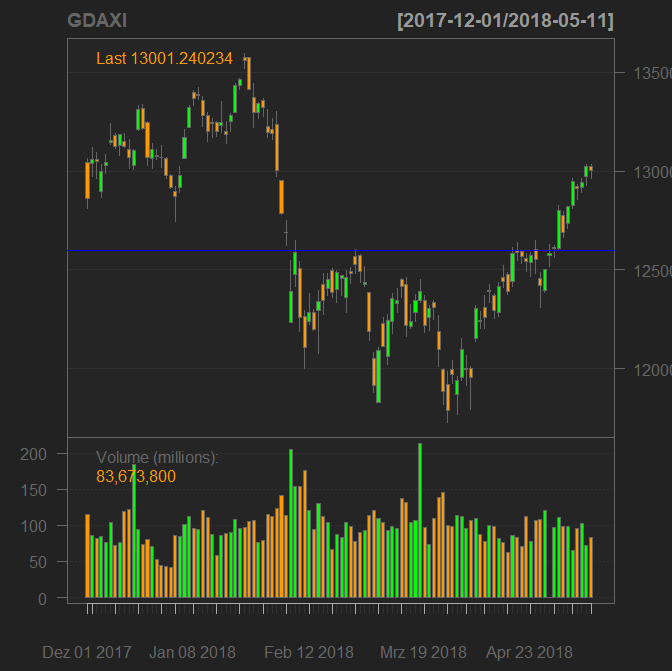 So we sold  Comstage-DivDAX at break-even price and iShares Core DAX with profit.

However, the market broke this level and continue to grow, reaching the next level at 13000, by which it currently fluctuates. Keeping additionally in mind "Sell in May and go away" it would not be smart to buy an index ETF right now. We tried to buy silver low but it also kept growing. So I dared to recommend Elle to buy the Viacom stock. It was not an easy decision after the loss with GoPro. However, fundamentally Viacom looks excellent: RoE of 29.43%, EBIT-Margin of 19.6% and P/E of 7.7 are really tempting. The website levermann24.com currently reports 8 points for the Viacom stock according to Susan Levermann's system.

The only point of concern were the transaction costs. However, €0.5 per trade is acceptable and as to so-called trade modalities (Handelsmodalitäten) bei DeGiro, for NASDAQ it will "chase" due to the trade with GoPro, even though this position is closed.

DeGiro, the cheapest broker available to German investors, charges so-called trade modalities (Handelsmodalitäten) for all stock exchanges other than the domestic one (for Germany the domestic exchange is XETRA). Recently we have noticed that DeGiro charged Elles account by EUR -0,29 trade modalities for NASDAQ in April, although we did not trade on NASDAQ in April.
29 cents might seem to be a ridiculous sum but I teach Elle to be precise in PnL-accounting, so we asked DeGiro. The answer was: as our portfolio grows (which is also the case by each installment/cash inflow), the modality is charged until the sum of charged fee reaches €2.5.
This complicated fee logic is really irritating and had we known it in advance, we would probably not trade at NASDAQ at all. But since it will be charged all the same, we can neglect it (until the end of year).

Last but not least the Nickelodeon Kids' Choice Awards (by which the kids decide upon winners) has influenced Elle's decision 🙂
So we bought ... and got an unpleasant surprise today: according to Reuters, CBS sues controlling shareholder Redstone to stop Viacom merger plan; this causes the drop of Viacom stock by -6%. However, contrary to the GoPro case we take it easy: here we do not have to do with a bankruptcy risk, here we merely encounter a typical market overreaction. But we have enough time to keep the stock and let good fundamentals work for us.

Questions, suggestions, ideas from yourside! You are welcome to discuss them in Elle’s forum!