Leoni AG is a German company, specializing in production of high-quality cables for cars. Its shares are traded in sDAX (index of the best German smallcaps). From the beginning of the year Leoni's stock has lost more than 50%. Today, as Leoni has issued a profit warning, its stocks first fell about -6% but then quickly turned around to +5%, ending up by +1.5%. It may mean that the market is tired of the negative news. And even if not yet, German automotive is already fundamentally cheap. 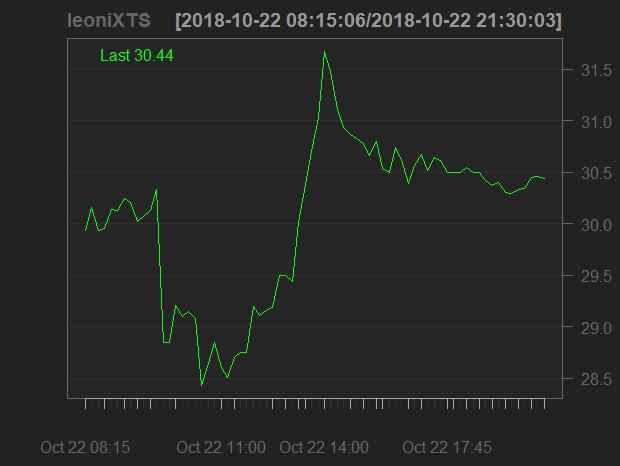 It is generally well-known that not the financial information per se is important but how the market reflects it. There were more than enough historical cases, as a company reported profit and still its stocks fell and vice versa: despite of losses the stocks did grow. Today we had an opportunity to observe a particularly interesting case: Leoni's stock has first dropped after the earnings warning but then it jumped.
Does it mean that now it makes sense to take a long position in Leoni? Well, it indeed might be a good idea but let us look at the automobile branch more broadly and, in a sense, "more stategically".

(Note that we don't consider Volkswagen AG since it is suffers from the Dieselgate aftermath but do consider Osram, since it sells a lot of its production to car producers).

As you can readily see, the stocks are reasonable in terms of profitability and pretty attractive in terms of P/E and P/B. Of course the automotive stocks are generally cheap due to the economic cyclicity: a new car is the last thing that one purchases during an economic recession (let alone economic crisis).
However, it is still an open question whether the next economic crisis will come soon. But as you can readily see, the stocks have already significantly fallen.

Whereas an especially conservative investor may still wait for a turnaround in Daimler, BMW, Schaeffler and Continental, the turnaround in Osram and Leoni might have already happened. And a fundamental investor can already buy them as a long term investment: with an exception of Continental* we, ourselves, did it.

A careful reader may ask: have you invested in Daimler, too? Finally, you recommended it for speculation only but in no way for investment!
Yes, this true but our scepticism was substantially due to the technical (and not only technical) incompetence of Dr. Z[etsche]. As he resigned and the junger Schwede took over the CEO position, we got more optimistic.

One thought on “Intraday Somersault of Leoni AG stock: A General Turnaround in German Automotive?”