If you got an offer (via a social media) to provide money for an FX managed account and share the profit then you most likely encounter a scammer. However, not always. Recently, we got two offers and by these examples we explain how to distinguish a typical scammer from a trader, who likely does make money. 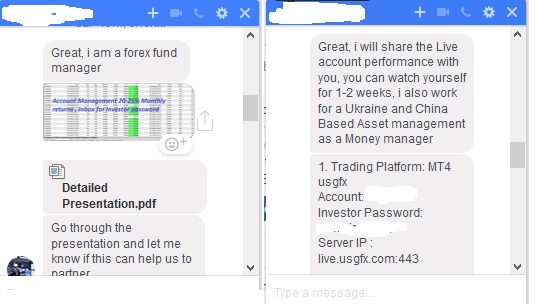 We always emphasize that a track record yet does not guarantee the future performance, however, the lack of it is a clear sign of trader's dilettantism. Unfortunately, not every track record is genuine. The scammers usually open many [demo] FX-accounts and make "profit" on some of them just by luck. Then they offer their victims to check their performance live, providing an access to a "lucky" account for 1-2 weeks. If you see something like an "offer" on the screenshot above, you have definitely encountered a cheater. To be 100% sure you may ask him/her why s/he doesn't provide a track record on fxblue or myfxbook. Then s/he will likely disappear or tell you some implausible bullshit.
A smarter scammer will, however, provide a track record on a third party server. Unfortunately, not every track record (even if it looks impressive at first glance) is genuine. Remember, if the trade history is short and/or the amount of trades is small then there is no evidence that the profit was not achieved by a pure luck! If you see a large drawdown then most likely the profit is reached by means of a too aggressive leverage (overbetting) and this guy will sooner or later lose everything! (Recently we have correctly predicted this for IREX wikifolio).

However, there are also guys that likely have a real edge! This track record on myfxbook is really impressive!
First of all, as one can readily see, he makes huge returns by virtually no drawdown! And this is not just a single overleveraged lucky trade, he commited enough trades to make the law of large number applicable!

Notably, his hit rate 60.18% by EURUSD (535 of (535+354)) is even better than that of Einstein! Unfortunately, this guy discloses little info about his system (what we readily understand). Thus, contrary to Einstein, we can say little on how his system works.

However, look at the trade duration. A typical trade lasts just several seconds. So likely the system patiently waits for big spikes and then opens a position in opposite direction. Usually, the spikes are compensated by the mean reversion and if it is the case, the system likely takes profit (otherwise the position is closed with a small loss). Notably, the hit rates by long and short positions are, respectively, 60% and 58%, i.e. very similar, which also speaks for the spike hypothesis since the spikes occur in both direction with approximately same frequency.

We will keep watching this system on myfxbook because we are very curious, how long this system remains viable. Often suchlike opportunities tend to be quickly exhausted...