Elle, a 7-year old girl, made her hands dirty in stock picking. This time she decided to buy GoPro stock. I was about to make use of my veto right but finally found her decision not bad at all. 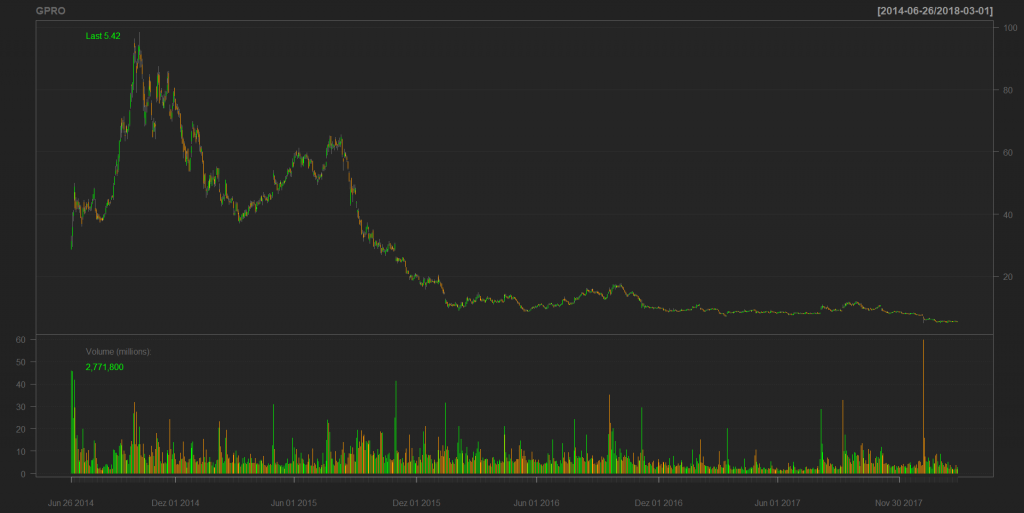 Two months ago we have started an interesting social experiment, letting a seven year old girl manage her wealth. Currently the markets are falling and I worried that Elle might become demotivated with her portfolio drawdown. Fortunately, it was not the case. She said that temporary losing €10 is not a problem for her, since the portfolio shall eventually grow. Elle does not yet possess fractions and percents, so I communicated her the idea that our portfolio is still better than market as follows: had we just bought the stocks instead of spreading our capital between stocks and silver, the drawdown would be about €16.

Then Elle has suddenly announced that this time she already knows what she wants to invest in: I want to buy shares of the company that produced this cool action camera, stated Elle.
As a matter of fact she loves shooting videos both with a smartphone and her action cam, which is, however, just a cheap noname model. As she got an opportunity to film with a GoPro camera, she was really admired.

Ironically, I have successfully speculated with GoPro shares several times and I am clearly aware of company’s problems. Thus my first urge was to make use of my veto right (what is good for an experienced speculator may be bad for a 7-year old girl). However, it is (nearly) always better to explain the risks than to merely prohibit. So I said: Elle, GoPro cams are really cool. But they are really expensive, that's why also your parents cannot afford buying it to you. And if only few people buy them, a company runs into trouble...
The answer was: as soon as I earn a lot of money I will purchase me a GoPro cam! (I didn't guess to ask whether she is going to earn a lot of money with stocks or somehow else :)).
Anyway, such enthusiasm really should not be extinguished. So we made a deal with Elle: this time we invest in GoPro stock (rather than in an ETF) but we will sell it if it drops below $4.3 (i.e. -20% but as I already told you, Elle does not yet understand percents).

Of course the investment is pretty risky. Moreover, when we buy a single stock we have (contrary to ETF) to pay a broker fee (fortunately, it is just about €0.5 for American stocks).
But finally I, myself, find the trade not so bad. From chart point of view the stock price has stabilized. Although it is not yet clear which direction the stock most likely goes, we definitely don't try to catch a falling knife.

So why not to wait until the direction gets clear?

Well, because as you can see from the chart, GoPro jumps abruptly. Thus if we keep waiting we might simply miss the opportunity: it would be definitely suboptimal to buy after a big jump. 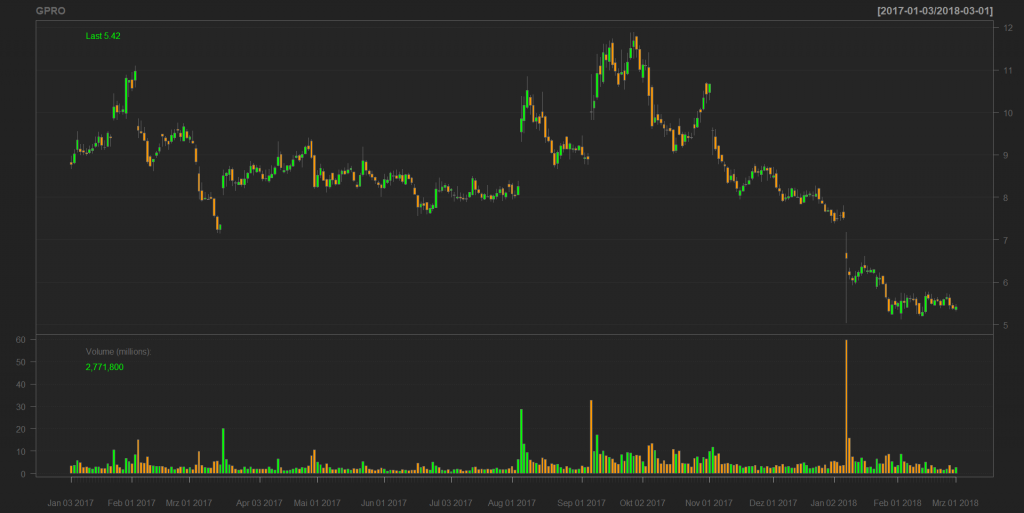 And historically the stock grew several times more than 20% after a significant drop, so it makes sense to accept the risk of -20%.

Last but not least, GoPro is definitely a brand.
In a sense, it resembles to some extend the Nokia story, doesn't it? Nokia stock sored but finally grew about 6 times from its historical minimum due to the partnership with Microsoft. And GoPro is an attractive company for a takeover.


Anyway, Elle has already earned about 2% with GoPro! 🙂
Elle’s current account statement is as follows:

Questions, suggestions, ideas from yourside! You are welcome to discuss them in Elle’s forum!