On 25.12.2016 I bought a put on nVIDIA since I found the stock extremely overpriced. I called it "nearly perfect trading decision", inter alia, because the implied volatility was though plausible but still high. Yesterday after the publication of Q1 financial report the stock jumped 18%. My put option is about 50% down since purchase time. But due to a strict money management I have capital for the 2nd and even fors 3rd attempt and I still consider nVIDIA as heavily overpriced. 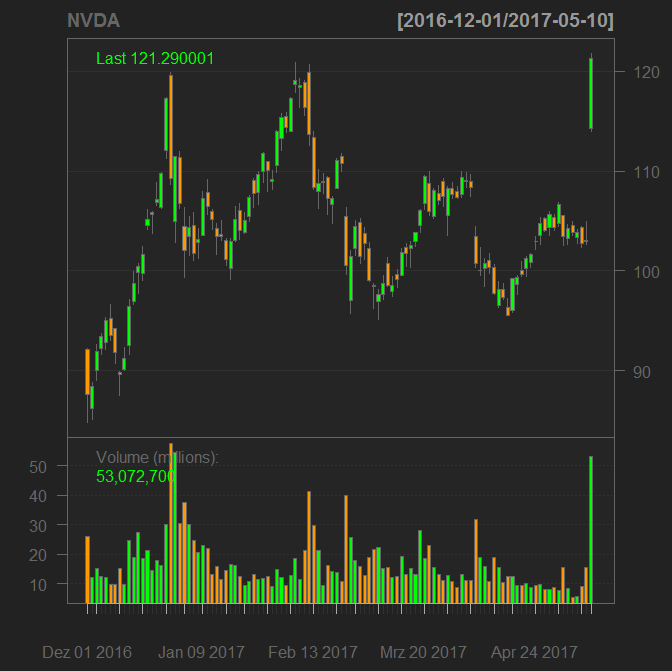 First of all I should admit: though I correctly guessed the stock price decline, the trade as such was unsuccessful. What follows is not an attempt of self-justification but rather an analysis whether the 2nd attempt is worthy.

First of all one readily sees that the stock currently tests a strong support level at 120. I am not a big fan of technical analysis but from my experience the distinguished support levels usually do work. I expect the stock will stagnate around this level and if it will be the case, it is an argument to buy a put.

Secondly, the stock is still heavily overpriced in terms of the P/E ratio.

Last but not least, the implied volatility for puts is pretty low. As I already reported, is not so easy for German retail investors to buy a put. Usually they have to buy so-called Optionsscheins (warrants issued by the banks) that are traded with a significant bid-ask spread.

The stock chart suggests a put with the strike of $100.
I found two suitable optionsscheins: DE000CY0CFD6 (issued by City) and DE000TD7Q1G8 (issued by HSBC). Though the latter has longer maturity (which I usually prefer), the former has lower implied volatility (34% vs. 37%) and much nicer bid-ask spread.

I simulated the future prices of both optionsscheins with our option scenario simulator. Both scenario realms are suitable for my risk appetite but also in this context the optionsschein by City is slightly better.

So I am going to wait until the exuberant momentum expires and then buy Put-Optionschein from City. As usual, under very strict money management, since the nVIDIA stock has already reminded me quite well: the market can stay much longer irrational than a trader can stay solvent!