As we have recently reported, one of our readers has set up a savings plan (€100/mo.) for his 7 years old daughter Elle. We loved the idea and suggested him to let the girl decide herself,
which stocks and ETFs to buy; letYourMoneyGrow.com team assists in risk management and portfolio optimization. Our ambitious goal is to grow a new (female) Warren Buffett. Meanwhile, Elle made her first investment decision!

Elle, although she is merely 7 years old, is a very smart girl. She readily grasped the idea of an exchange-traded company. We explained it to her in a simple way as follows: a company is founded when a group of people is going to work together and sell the goods or services. They need money in order to buy an equipment or to rent an office. They can invest their own savings and/or sell the company shares at a stock exchange. Everyone, who buys the stocks is a co-owner of the business and participates in profit. However, there is a risk to make a loss, since the stock price may fall, e.g. when the company earns little or no money. It turned out that Elle already knows some companies, for instance, she knows that Adidas makes cool sport shoes and German automotive industry (she knows Volkswagen and BMW) produces good cars (well, she is too young to understand the aftermath of the Dieselgate).

Further we told her about Warren Buffett, a very rich man, who made his fortune buying the stocks of good companies low and selling them high. Elle really liked the idea to buy low and sell high. She immediately asked, which good companies she can buy. We told her that searching for the good companies one should first of all have a look at American DowJones and German DAX. In between we have explained the idea of a stock index: it is a basket of many individual stocks, Dow and DAX consist of 30 largest companies that are, in a sense, the most solid (but not always the most profitable).

The problems is, however, that we want to buy the good stocks low. And meanwhile there is only one "obviously cheap" stock in Dow Jones: General Electric. 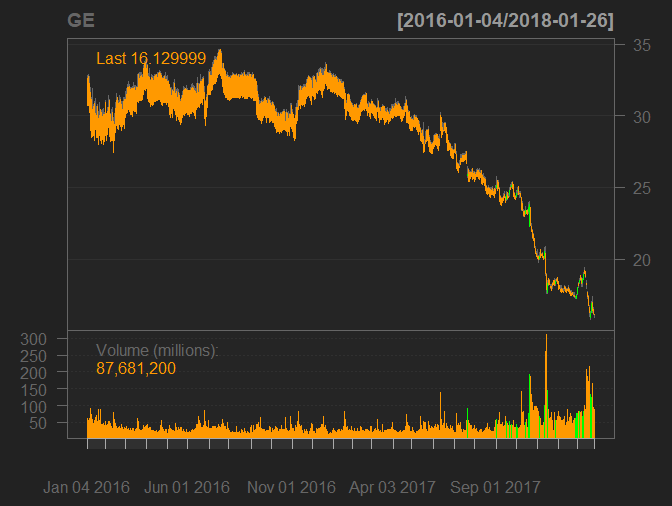 We told Elle that General Electric is a solid company, which was founded by Thomas Edison, who invented the bulb. We explained her that GE got into trouble essentially because it has too aggressively dwelt into financial industry, instead of concentrating on its core business.

A fairy tail about core business

Interestingly, Elle likes very much a Russian fairy tail about a pancake, a sparrow and a mouse. At first everyone in this trinity was doing its core business: a sparrow brought seeds and beans, a mouse cut wood with her sharp teeth and a pancake cooked a soup (diving into it to make it tasty). But once a sparrow decided that his job is the most difficult, so they swapped their duties.
As a result, a sparrow broke his beak trying to chop the wood, a fox has bitten a large piece of a pancake and a mouse scalded herself when dived into hot soup in order to make it tasty.

Finally we told Elle that though we believe that GE stock will grow, it is a bad idea to buy it right now (don't try to catch the falling knife).

As to the German DAX, there are more candidates.
The "cheapest" stocks are definitely E.On and RWE, the energy suppliers. However, as we explained, they are in trouble because they missed the trend of renewable energy and that's why they are though cheap but hardly good anymore. Since Elle sees the wind mills and solar panels everywhere in Germany, she readily understood what we were talking about.

As to German car producers, we told Elle that their stocks are really cheap, not only in the sense of price chart, but also in the sense of the P/E coefficient. (We have to admit that we have -so far - failed to communicate Elle the idea of P/E ... well, she is just in the 2nd form of a primary school and has not learnt the multiplication and division yet).
However, we explained that these companies may also stop being good because their cars stink and pollute the environment thus it will be hard to sell them if competitors manage to produce inexpensive electric cars (we avoided talking about the Dieselgate in order not to make a complicated topic even more difficult).

Finally, we had a look at Henkel and Pro7. The former was no-go for us since we currently have just €100 and the stock price is higher. The latter seems to be really attractive, both on price chart and from fundamental point of view: 6.68% DIV, P/E 12.4, gross margin 17.32%. The problem is that we would have to pay at least €2 broker fees by DeGiro if bought this stock. Though it is still very low (for Germany), we explained Elle that it is prohibitive to waste €2 of €100 when we pursue making €6 (6%) profit in a year.

That's why we suggested Elle to buy nothing so far and wait for the next one or two monthly savings. However, it is probably the biggest challenge to teach a seven year old kid to be patient. Elle readily reminded us that she, herself, manages her wealth.
We could have of course use our veto right but it would likely nip girl's motivation in the bud. That's why we have suggested an alternative and told her: though the stocks are probably the best asset classes to invest, it is not the only one. One can also buy, for example, Gold or Silver. Precious metals don't produce anything but they are rare and their prices usually go up when people have fear to lose their money. Though it is not a way of Warren Buffett, you shall not blindly copy him, so we can use this opportunity if you want. A significant advantage is that we can trade Gold or Silver ETC without broker fees... Elle likes jewelry very much thus she readily accepted this idea.

We decided for Silver (ETFS Physical Silver, DE000A0N62F2, VZLC) due to the following reasons:
1) Gold-ETC (e.g. DE000A1MECS1) are traded above €100 per share (once again, we have only €100).
2) According to Silver Report 2017 Update 1 by SRC AG the ratio of existing and annually produced ounces of silver to gold is approximately 16:1. Concurrently the price difference of an ounce of gold to an ounce of silver is 70:1!
3) We don't believe that the recent exuberant growth of stock market will continue for a long time and thus readily choose attractive alternatives (we don't try to explain this to Elle so far).
4) Due to inflation, it is better to keep money in a Silver ETC (0.49% management fee is less than the real inflation in EU-Zone). This is a Physical ETC, so there is no rollover costs.
5) In long term the price chart looks attractive (we are aware that the price in USD may be more representative than the price in EUR but anyway).